Stimuli is a multimedia performance which combines music, visual art and theatre. It is a work in which all elements are integrated from their conception, in order to create an original art form. Video and animation from Meriel Price are combined with music by composers Luke Bedford and Larry Goves and texts from poet Jack Underwood.

A chain of stimuli is set up between the participating composers, poet and visual artist to create this essentially integrated work. Meriel Price has been awarded a Elsa-Neumann-Scholarship for this project

You can find more information on stimuli here

Meriel is the baritone saxophone player for the Redux Orchestra, a 17 member ensemble lead by composer Ari Benjamin Meyers. They have performed in venues such as the Springdance Festival Utrecht, HAU2, Watergate, Radial System.

Their CD Symphony X was described in Die Zeit as “A completely new music that doesn’t even have a name yet.” and by Titel Magazine as “…a masterpiece somewhere between experimental, classical, minimal, and noise.” The installation version created together with artist Tino Sehgal has been performed in galleries such as K21, Düsseldorf and KW, Berlin (World premiere of the accoustic version).

The performance in Düsseldorf was part of the SCHALL UND GLUT series from tanzhaus nrw.

Symphony X is a love letter to neo minimal no-wave music, a style that came into being in New York City in the late 1970’s and early 1980’s. In this very physical work, compositional procedures influenced by composers such as Glenn Branca and Rhys Chatham meet elements from post punk, minimalism and contemporary music. Musical situations at a steady 120bpm are exposed to a permanent web of construction and deconstruction, leading the audience’s expectations astray. The composer and musician JG Thirwell aka Foetus describes the work this way: “a vividly evolving, involving minimalist meditation that is propelled by a rock backbeat. It pummels thru a dizzyingly unrelenting series of progressions, existing somewhere at an intersection of Branca, Glass, and Love Of Life Orchestra.

While symphonic music has changed drastically over the course of the last 250 years, the formats of its presentation, the concert, basically has not. Tino Sehgal, an artist who has redefined the format of the exhibition, creates a spatial and temporal framework for the symphony, which is as ever-changing as the music itself and can be described as a ‘choreographed space’. (From the Springdance website)

To hear an excerpt of Symphony X click here

Henri Pousseur’s opera undoubtedly ranks among the works that have shaped the genre of musical theater in the late 20th century.

By drawing on the universality of Faust, Henri Pousseur and his librettist Michel Butor succeeded in bringing to light the contemporary implications of the narrative, its representation, and its reception. During the performance, the audience has many opportunities to determine which course the opera will take. Through these interventions, which can range from deciding what direction the plot will take, to abandoning a scene altogether, the audience chooses where to take the work.

This was a co-production of Work in Progress with Theater Basel with the support of Kultur Stiftung des Bundes. The German premiere took place in February 2013 in Radial System V and the Swiss in November 2013 in Theater Basel.

Meriel is the soprano saxophonist of the Apollo Saxophone Orchestra, a 12 piece ensemble drawn from an exciting line up of saxophonists from across England, Scotland and Europe. In 2012 they recorded the CD Perpetual Motion which features 10 original works written for the ensemble by internationally renowned saxophonist and composer Barbara Thompson. The World Premiere was performed at the World Saxophone Congress in St. Andrews, Scotland, which also featured a video broadcast of a shorter version of the BBC documentary about Barbara – her music and her battle with Parkinson’s Disease.

“The playing of the whole ensemble is quite sensational.” The Observer 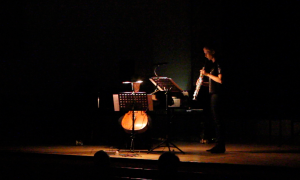 Meriel is the saxophonist for the Berlin based contemporary music ensemble JungeMusik. She regularly performs solo and ensemble works in festivals such as the Weimarer Frühjahrstage für zeitgenössische Musik, Klangwerkstatt Berlin, Intersonanzen Potsdam and the Randspiele.

For information on the ensembles DieOrdnungDerDinge, Aside and Music for Chameleons look under the heading Music Theatre.