Staring at the bin

Staring at the bin, 30 performances of 27 music theatre miniatures written for public spaces by Meriel Price, had its world premiere at the Munich Biennale International Festival for New Music Theatre 2016. The accompanying exhibition opened on the 28th May 2016 in a purpose built exhibition space in front of the Muffathalle in Munich.

DieOrdnungDerDinge is a Berlin-based ensemble, formed by actor-musicians and devoted to the development of staged concert programmes that explore the space between concert and theatre/performance evening in a highly visual, often playful manner. DieOrdnungDerDinge are Iñigo Giner Miranda, Vera Kardos, Daniele Pintaudi, Meriel Price and Cathrin Romeis.

His Master’s Voices – a musical séance had its world premiere on the 23rd June 2016 8pm in TAK – Theater im Aufbau Haus Kreuzberg, Berlin and is the lastest work from DieOrdnungDerDinge

His Master’s Voices is a musical and theatrical dialogue with the past, inviting the spirits of dead composers to attend each evening (seats have been reserved) through contemporary works which are inspired by and transform material from the past

More information about Ensemble DieOrdnungDerDinge can be found here

They develop performances and compositions which are tailor made for each performance space, its location, its programme and its audience. Aside examines, deconstructs and challenges the expectations of each specific audience found in each specific venue.

The basis for Aside is the concert stage in all its forms. They draw their material from that which is unintended, private, uncontrolled, uncomfortable, accidental, mistaken and attempts to be hidden. Aside enlarges and transforms this material. Alongside purely musical material this is an essential element of Aside.

Aside thereby blurs the boundaries between performance and composition, between sophistication and diversion.

They work within the space that can open between what is intended and the outcome, between expectation, disappointment and fulfillment.

The premiere took place in April 2014, in the 150% Made in Hamburg Theater Festival at the Mojo Club and was kindly supported by The Rusch Stiftung, KKWV of the UdK, Berlin and KLANGZEITORT, the institute for new music of the UdK and HfM Hanns Eisler

They explore innovative methods of creating new music theatre as a true collective, in which each member is an author and creator. A concious move away from the traditional hierachical Director/Composer lead forms, which the collective feels is essential to creating a new form in which all elements are fundamentally combined, balanced and integrated.

A Game of Fives 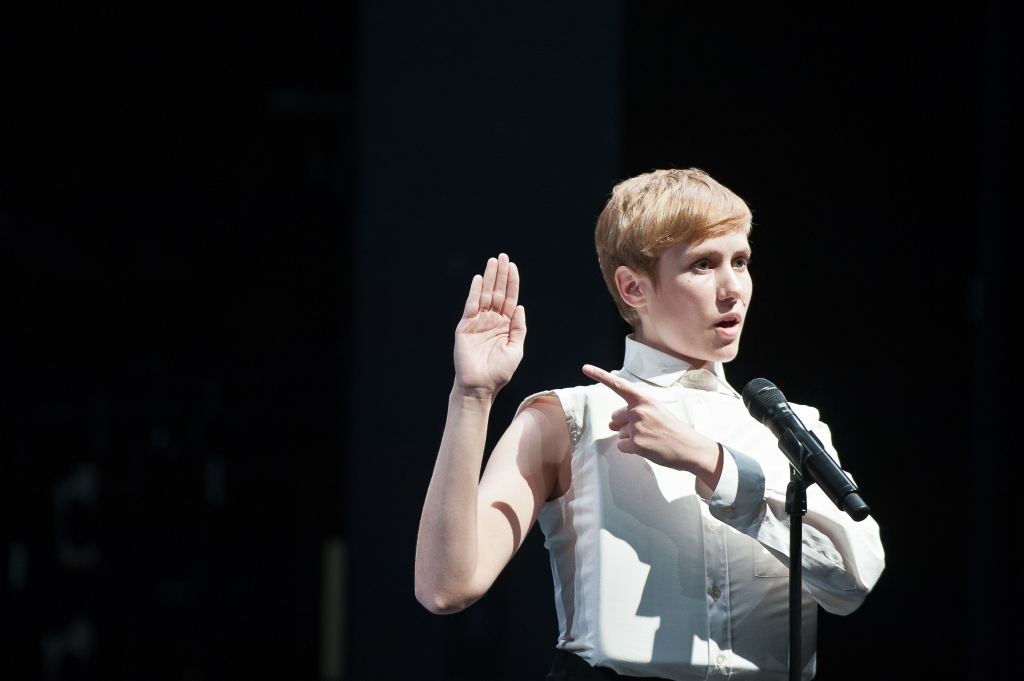 As an actress and saxophonist Meriel appeared in A Game of Fives in the Munich Biennale and UNI.T, Berlin. In this work five composers collaborated with director Enrico Stolzenburg to create a new music theatre performance based around the work of Lewis Carroll.

The new music theatre production Reclaim Your Opera was created by Meriel Price together with the composer Maximillian Maintz.

A preview of the work formed the opening concert of the KlangKunstBühne Festival 2013 under the title Reclaim your Preview. For this festival Meriel Price created two new music theatre works, I’m Feeling Unwell, based on a poem by Jack Underwood, and Inside Out. Both works deal with the inner life of a performer, exploring what lies beneath the polished facade. Things best left hidden begin to show through.

The premiere of Reclaim you Opera took place in April 2014, in the 150% Made in Hamburg Theater Festival at the Mojo Club. Reclaim Your Opera was kindly supported by The Rusch Stiftung, KKWV of the UdK, Berlin and KLANGZEITORT, the institute for new music of the UdK and HfM Hanns Eisler 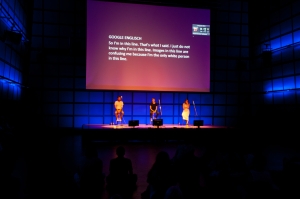 In August 2013 Meriel Price was invited to perform Love.abz at ZKM (Centre for Art and Media Karlsruhe) for the KAMUNA (Karlsruhe Museums Night) Festival.

This work by Otso Huopaniemi involves live dramatic writing, complicated and enhanced by the use of voice recognition technology and google translate.

In the words of Otso, “love.abz invites the audience to reconsider the fundamental acts of reading and writing, as well as the complex relationship between humans and the digital tools that increasingly shape their lives. It introduces a form of 1) improvisatory, 2) collaborative, 3) live dramatic writing that Huopaniemi has developed in rehearsals together with the performers. Machine translation and speech recognition technology are the main tools that have lent themselves to the purposes of this writing method. Harnessing the comical potential these technologies afford, love.abz celebrates the playfulness of writing, in earnest.”

Meriel demonstrated her skills in fire fighting and saxophone playing when she performed in Biedermann und die Brandstifter at the Berliner Ensemble.

Music theatre for children with the clair obscur saxophone quartet and actor Johann-Michael Schneider. Performed at the Stadttheater Bielefeld 2011.